Some of Donald Olsen’s most beautiful designs never left the conceptual phase. This section is dedicated to some of the most interesting and striking projects that remain unbuilt.

For a brief time in the late 1950s, Olsen was teamed with Mies van der Rohe in service of Herbert Greenwald, a Chicago developer looking to expand to the West Coast. Greenwald and Mies already completed several residential towers in Chicago when the developer arranged for Bay Area planner Herman Ruth to be his West Coast consultant. Ruth, in turn, called on Olsen; the men shared an office, and Olsen had designed Ruth's home.

The towers never came to fruition because Greenwald died in a plane crash in 1959, and the plans went no further. 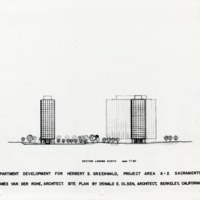