"I joined the Faculty of Architecture in 1972. Before coming to Berkeley, I had been in practice for eight years in New York City, and I taught at Columbia University. My interests and sympathies were in line with the 'left-leaning' architects of the 1960s succinctly expressed by my own teacher, Percival Goodman, who taught us that the responsibility of the architect was 'not merely to create physical forms, but also to serve as an advocate for improved social conditions.' Berkeley's reputation, and what I found there, made me feel very much at home.

In the 1970s Berkeley was the 'crip capital' of America, a well-deserved reputation because the population included an unusually large number of disabled people living in the town, independently, outside custodial care. For the 1970s this was an unusual situation made possible for two reasons. Various grass roots organizations were active, formed in response to their presence, and the University and the Berkeley community were supportive. A group of former Berkeley students, themselves severely disabled, had recently created The Center for Independent Living (CIL), which offered services that disabled people needed such as accessible housing, attendant care, legal aid, and health counseling. CIL was a unique institution. Through its offices the local population was helped to buck bureaucratic government processes where conventional biases—or regulations—about what was 'best' for the disabled client often made a difference between what was technically available but denied. Observing CIL on a daily basis, I became aware of what the concept of 'access' entailed and of the critical importance of the built environment in allowing 'independent living' to flourish.

My first teaching assignment was Arch101, Social and Behavioral Factors in Design, an undergraduate studio course, the first of four required for the major in architecture. It was taught each quarter to nearly 100 students. The course title indicated a concept, but there was no curriculum. I knew that others had dealt with these giant factors as routine aspects of 'functionalism' and 'ergonomics' associated with modern architectural design. I welcomed the freedom. From my experience in teaching at Columbia, I knew where I wanted to begin. I had already discovered excellent colleagues who were associated with the new PhD Program in Social and Behavioral Factors, recently established by Roslyn Lindheim. Their students became my graduate student instructors, but in various ways, I became their student, and in other ways, we became colleagues. Halim Abdelhalim, Suzanne Crowhurst, and Dennis Williams were among those students drawn from the pool offered by Lindheim and also by Christopher Alexander's program, The Building Process."

Excerpts on this page from "Rethinking Architecture, 1972-1987" by Raymond LIfchez, in Design on the Edge: A Century of Teaching Architecture at the University of California, Berkeley, 1903-2005, (Lowell, Byrne, and Frederick-Rothwell, Eds.), 2009. 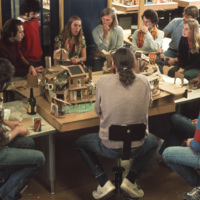 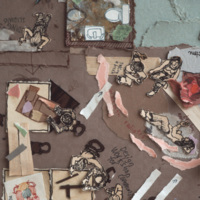 "Already architects before entering the PhD program, the graduate students' academic work paralleled what we sought to teach in studio: design informed principally by what the social sciences, philosophy, and the history of architecture could tell us about making more humane environments as architects. We sought to change conventions in design education that stood in the way of the material about disability we wanted students to learn. This meant innovations in design techniques and studio criticism that would make our subject unique and challenging for the students. In the decades that ensued, we produced, individually and jointly, a number of published articles about our work or about subjects informed by it. Williams and I co-edited a special issue of the Journal of Architectural Education (JAE) devoted to the teaching and research of colleagues who shared our interests. In 1981 Dana Cuff, then a graduate student in the area of Design Methods, and I co-edited another special issue of the JAE devoted to the reports of practicing architects who were also concerned about social issues in design.... In sum, Architecture 101 had become more than a teaching assignment; it was also the touchstone for research and publishing. In my experiences since then, the relationship between teaching and creative work has never been more satisfying. Those of us involved in teaching the course enjoyed a warm, respectful, and inspiring relationship. Design for Independent Living: The Environment and Physically Disabled People, nominated for the American Book Award in 1980, is a tribute to that relationship."  Images courtesy of the Visual Resources Center, UC Berkeley, Raymond Lifchez slide collection. 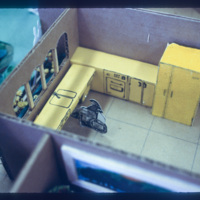 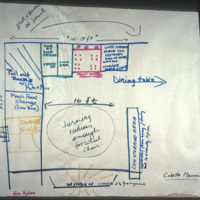 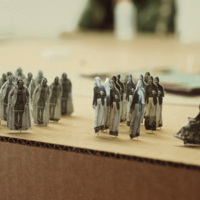 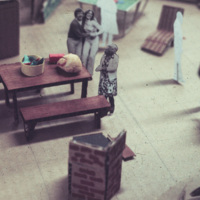 Teamwork and client biographies: "We taught Architecture 101 each quarter. The quantity of student work produced cumulatively made ongoing innovations possible and timely. Early on we replaced the conventional one-on-one design tutorial with team tutorials. Students experienced the real-world dynamics of professional life through working in teams.  The conflicts that arose became an important aspect of their design education. At another point large architectural models replaced drawings as the principal vehicle in teaching design. Models emphasized the importance of construction techniques but also required that students 'furnish' them in ways that best explained how the spaces envisioned were to be lived in. Students were asked to create 'biographies' of the people they had in mind as their 'clients,' and to write 'scenarios' that explained how their ideas about design would be experienced. Students' responses to these assignments revealed attitudes that gave form to their work. We addressed what we learned in subsequent lectures and reading assignments." Images courtesy of the Visual Resources Center, UC Berkeley, Raymond Lifchez slide collection. 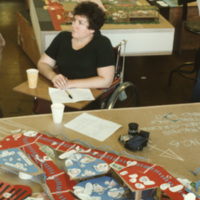 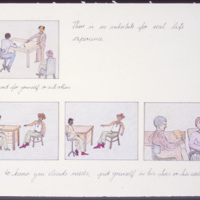 Design Consultants: "In 1974 Mary Ann Hiserman, a severely disabled woman in an electric wheelchair, applied to enter the architecture major. Rheumatoid arthritis also affected her hands, which raised doubts in the Admissions Committee about her ability to make the drawings and models expected of an architecture student. Arch 101 was well set up to receive her. Mary Ann joined a group of students who indicated enthusiasm in having her as a member of their design team. Of their own accord they lowered their workstation to allow Mary Ann to be visually and manually involved. Things went amazingly well. Students assisted her with models and drawings when her manual dexterity failed.

Mary Ann was not shy and spoke easily and interestingly about her daily encounters with the built environment. Her team showed a keen interest in what she had to say, especially about her routine dependence upon others in order to live "alone" as she did. Mary Ann's presence in the studio led to inviting others with disabilities to visit the studio and to discuss the students' work with them. The students enjoyed these intersections with the "real world" and soon these visits became routine and the visitors became our design consultants. With 80 to 90 students working in design teams of five to six students, we needed 12 to 15 consultants to be effective. We advertised and the numbers grew. Eventually there were around 30 individuals—using wheelchairs, letter-boards, walkers, white canes, and hearing aids; individuals—some accompanied by their attendants, guide dogs, or house mates— who came or could be called upon routinely. As our studio process became more elaborate, we decided that consultants should be paid. An application to the Exxon Education Foundation produced the funds to carry on our work in this fashion for three years. Our objective was to make disability and access an integral part of design education." Images courtesy of the Visual Resources Center, UC Berkeley, Raymond Lifchez slide collection.