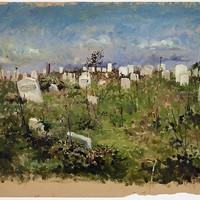 The great public cemeteries in the United States all began as monumental landscapes, playgrounds for the picturesque, where the growing middle classes both buried their dead and took refuge from the rapidly industrializing cities. There they could contemplate the “sweet hereafter” in a setting with an obvious kinship to Central Park or the leafy suburbs, then rising as part of the same cultural forces that created the modern cemetery. Still, these silent cities evolved from a social form that gave us a range of civic institutions including the temple and the astronomical observatory, the theater, and the university. But where has this great social form gone in the last century? Fatal Design tells the tale through the rich holdings of the Environmental Design Archives.