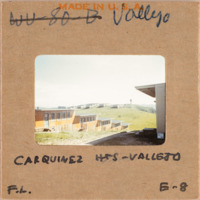 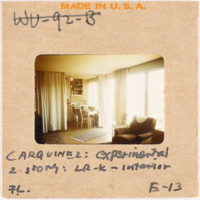 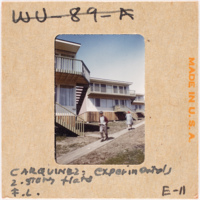 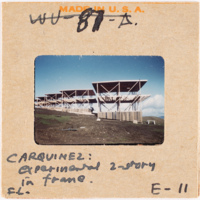 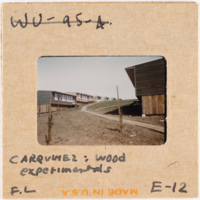 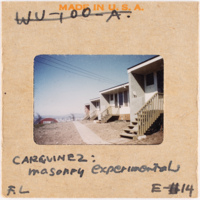 Starting in 1941, Bauer had the opportunity to witness the planning and construction of housing for war workers at Vallejo, California. Her husband, the architect William Wurster, had taken on the challenge of designing housing for workers at the Mare Island Naval Shipyard not far from the Wursters’ home in Berkeley. Housing historians celebrate Wurster’s design for both its practical considerations in reducing the need for grading and its visually pleasing fenestration and use of color.

Most published photographs of Carquinez Heights show the outlines of the houses against the rough texture of the hills in black and white. The Kodachrome slides in Bauer and Wurster’s collection show such features as blue doors, red exterior walls, white trim, and yellow light streaming through large windows into a modestly furnished interior likely designed and photographed by Bauer, herself.[1] When approached by the Department of Industrial Design at the Museum of Modern Art for advice on their 1942 Wartime Housing show, Bauer cited Carquinez Heights as an excellent example and asked whether the Museum had “considered using color transparencies at all?” in the upcoming exhibition.[2]