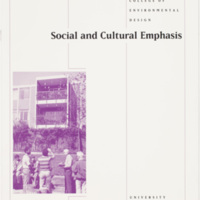 “Social and Cultural Issues in Environmental Design at Berkeley originated in the sixties as a response to serious social problems as manifested in housing, in medical environments and other welfare and educational institutions.  The faculty members at Berkeley who pioneered studies focusing on the needs of users were Sim Van Der Ryn (Dorms at Berkeley with Murray Silverstein, 1967), Chris Alexander with Sara Ishikawa and Murray Silverstein (A Pattern Language which Generates Multi-Service Centers, 1968), and Roslyn Lindheim (Uncoupling and Regrouping the Hospital System, 1967).”

“Much of the social focus in architecture at Berkeley stems from Catherine Bauer Wurster.  For much of her life she espoused the idea that a powerful connection could instrumentally link social science to environmental design, and her seminal 1934 book, Modern Housing, stated as much.”

Roger Montgomery with Peter Montgomery, “Architecture on the (Cutting) Edge,” Design on the Edge: A Century of Teaching Architecture at the University of California, Berkeley: 1903-2003, Lowell, Byrne, & Frederick-Rothwell (Eds.), 2009.

Sara Ishikawa integrated the innovative methods of A Pattern Language into her teaching: “I taught an undergraduate course called Housing and Neighborhood Patterns for Different Subcultures (later to satisfy the American Cultures requirement), and a graduate course called Housing and Neighborhood Patterns for Different Cultures, in which students were asked to study the history of the subculture or culture they were investigating and to identify existing patterns in that culture or subculture that satisfy current needs, and then to form a pattern language for a particular site and to design a housing complex for that site. I also taught design studios, using the pattern language.”

Lifchez, Raymond. (1979). The environment as a support system for independent living. Archives of Physical Medicine and Rehabilitation, 60(10), 467-476.

Woodbridge, Sally B. (2010). The College of Environmental Design in Wurster Hall, Frameworks, Spring 2010.  Accessed from http://www.ced.berkeley.edu/downloads/pubs/frameworks/sp10/woodbridge.sp10.fw.9.05.pdf.